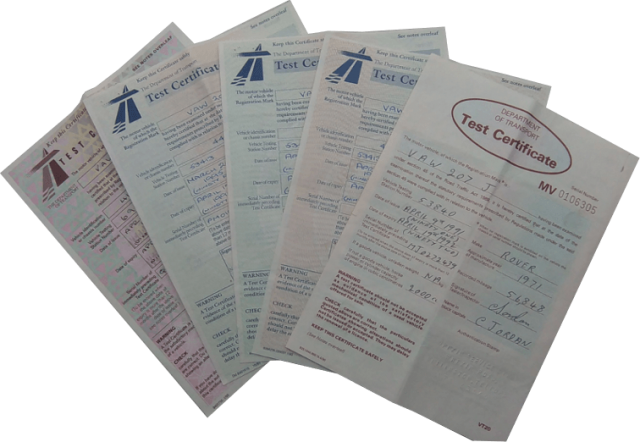 MOTs for classic vehicles has in recent years been surrounded in controversy. In many online chat rooms, there are calls for and against the annual test, but many people see the annual MOT test is a good thing. Having a properly trained mechanic independently check that we’ve been caring for our cars to the best of our ability and in line with the legal requirements for roadworthiness carries with it both peace of mind and also for some, a badge of honour.

The exemption of pre-1960s vehicles from the annual MOT test back in November 2012 and the FBHVC worked with the Government in the development of the policy. Many of us were surprised at this, but the FBHVC stated that some of the reasons that they were in favour included:

In the three and a half years that this scheme has been in place, the scheme is regarded as a success partly due to the fact that the accident rate of pre-1960 vehicles is  no worse than it had been before its implementation.

In 2014, the EU Directive on Roadworthiness Testing was put in place. It is a directive about testing as a whole by improving road safety across Europe with all member states testing their vehicles to the same standard. The Directive does not concern historic vehicles, although they are involved. The implementation of the Directive is now in the hands of the EU member states on how it will be implemented over the next two years for implementation by 2018.

The significant part of the EU Directive on Roadworthiness Testing for classic vehicles is that the Directive permits member states to exempt historic vehicles from the new testing regime and from what we know already, it does appear that the UK Department for Transport (DfT) will exempt them. The FBHVC will continue to work with the Department for Transport to ensure that it is implemented sensibly. Towards the end of 2014, the DfT allowed comment on the proposals for changes to the Directive, specifically to exempt vehicles from testing if they:

The comments received flagged some obvious issues that need to be resolved in order for the DfT to implement the new rules properly. Some comments included:

Of all that responded to the DfT, 63% were in favour of MOT exemption.

The discussions are ongoing, and the FBHVC continue to keep us updated with progress, but as yet there is little indication of what will actually happen in 2018.

What does it mean for me?

If the DfT continues in the current direction, it is likely that many of our vehicles could become MOT exempt in 2018. So where does that leave the owner / enthusiast? Actually nothing has changed. The owner is, and always has been, responsible for ensuring that their vehicle is in a roadworthy condition. The annual MOT is really only valid on the day of the test and if, eleven months later, your car suffers problems and becomes unroadworthy, it is still the responsibility of the owner. The only difference is that we lose our comfort blanket of the independent DfT trained (and tested) MOT tester to be the independent judge once per year. If you do not think that you are fully capable of ensuring that your vehicle is adequately maintained to MOT standards, then it would be wise to have an independent check done of your own. Whether you choose to do this by having an MOT anyway, or whether you have a service/inspection carried out by your favourite garage is up to you.

We will keep you all updated as further information emerges from the FBHVC. The Government will be updating their information at http://www.dft.gov.uk/classic-mot/ following the policy decision.