In complete contrast to the earlier Gaydon show in June, this event enjoyed bright sunshine, although we were all cooled by a fairly brisk breeze. The Morris Commercial Club stand was right next door to the J Type Register’s stand, resulting in a good display of vehicles. 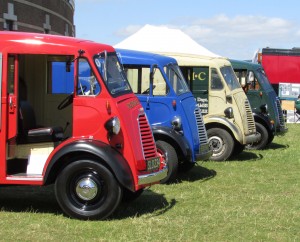 On the J Type stand, there was a line-up of four of these vehicles, one of which had only recently been imported from Kenya. It was in very “original”, but well used condition, and most notably, had been built with a full metal floor. The Kenyan J type can be seen 3rd from the left, in this picture. It was clear that there was going to be a lengthy restoration project. Another import can be seen at the far right-hand end. This vehicle had been brought back from Melbourne, and according to the owner, it came with BMC markings already in place. 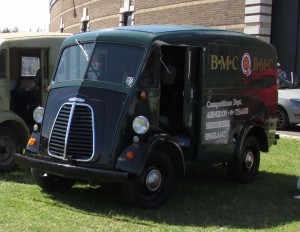 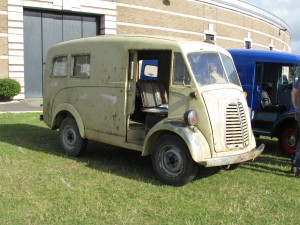 Many of these J types were built with wooden floors, for the home market, but this was evidently considered unsuitable for the African conditions, which could include such hazards as termites! 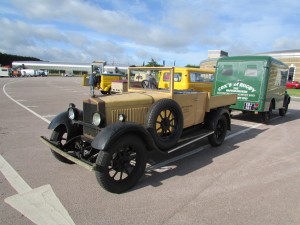 An intriguing “odd-ball” appeared earlier, in the form of an unusual Morris Cowley pick-up, seen below. This started life, in 1928, according to the Morris Bull-Nosed Register, as a Cowley saloon. The present owner had no other information of this vehicle’s history, so there was no record of the modification into its pick-up state. There is a possibility that it might have been used in the TV series, “All Creatures Great & Small”, because the name “Jeff Mallock” is painted on the passenger door.This character, we were told, was the local knacker. Despite the lack of  more reliable history, the 1548cc side-valve engine seemed to be original. 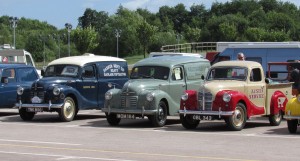 Here is a rare line-up of 3 Austin Devon light commercials. Two vans and one pick-up, all well preserved, and smarlt turned out. Another rarity, seen in the back of the Devon p/u, was this very smart A40 pedal car. 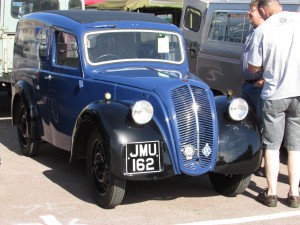 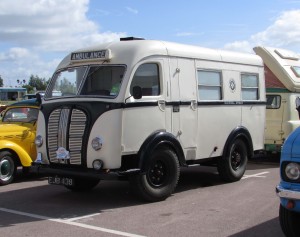 Also appearing at this show, was this Morris 8 ‘Z’ van, which had been kept in good condition. Another single example which was displayed amongst all the other vehicles parked opposite the Club stand, was this Austin K series ambulance, which, we were told, was one of very few examples remaining.