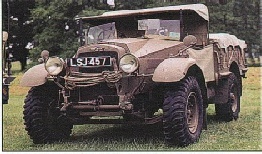 The MCC CS8 was built in three versions, Mks 1 – 3, until about 1942, when the 4 cyl C4 model replaced it. Until around late 1940 CS8’s were fitted with small aeroscreens and canvas doors, but during 1941 a revised cab appeared with a full windscreen and metal skinned half-doors. The 1942 C4 model was essentially the same truck as the CS8, but it had a 4cyl engine, and it was built in two Mk’s (different wheelbases), and was fitted with a full windscreen and metal doors like the late CS8’s. The CS8/C4’s were eventually replaced by the 4 cylinder 4X4 C8 quad models. These began production during 1944 , and were based on the earlier Quad artillery tractors.

The CS8 was powered by the 6 cylinder 25 HP side valve engine as used in the 8 cwt PU , and was produced in various forms for use in many different roles, including office, house wireless, water tanker, petrol bowser, 2 pounder portee, and compressor. The lengthened CS8 chassis was used as the basis of the CS9 armoured car. There are suggestions that around 100 of these were built. Some served with the BEF in France, and others in the North African desert, where their excessive weight and 4×2 configuration was a drawback.

Probably the best known CS8 Morris seen around the world may well be the vehicle used in the 1960’s U.S. TV comedy series ” HOGAN’S HEROES ” . Set in a WW2 POW camp the vehicle appeared in many episodes as a German truck . It was a rather lucky break for the series makers that this was historically correct as many CS8’s were captured at Dunkirk and subsequently used by the Wermacht.

During 1944 the 4X4 C8 appeared , based on the earlier Quad FAT gun tractor it used a steel or wooden GS body.

CS8 Production figures appear on the contract cards held at Bovington and the numbers add up to 21,319 vehicles built from 1934 to 1941. 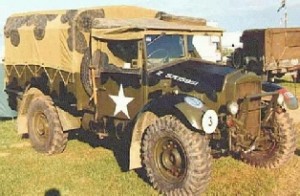 Compare the cab to the earlier 1934 – 1940  CS8, which had  aero screens and canvas roll up doors. Also note the spare wheel mounted between the cab and rear. The change over to the full style cab was also seen on other 15cwt class makes such as the Bedford MW and Fordson WOT2 around late 1941.

The standard CS8 seen in GS configuration. The factory fitted cargo tarp was often replaced in service with hoop sticks and a full tilt. The rear wheels have tags fitted, probably for the use of chains to aid the off road performance. A large military type air filter is seen between the seats. A small tool locker is located in front of the petrol tank off side. Also, a Spade holder can be seen.

Back to Military Vehicles